As skydivers, we tend to like to do things together. We like to skydive with our friends, give each other grief about any minor mistakes during the dive, celebrate our successes, and enjoy brews together after sunset. Some people prefer solo skydives on occasion so they can work on skills or just enjoy the sky without distractions.

However, there are such things as too much and too little togetherness in skydiving. And only a few seconds might separate the two extremes when we are talking about the proper amount of time/space to leave between multiple skydivers and groups exiting the same aircraft on the same jump run. Our goal when selecting the right happy medium number of seconds to leave between groups is to arrive at a delay that does two things:

The risk of leaving too little time is collisions between groups, whether these are freefall or deployment collisions. But leaving too much time can spread out the jump run so much that the last skydivers out may not be able to make it back to the landing area.

So how do we decide how much time to leave? Luckily, skydivers before us have developed guidelines to tell us how much time is safe between groups based on experience. Keep in mind, however, that two major factors play into the answer. 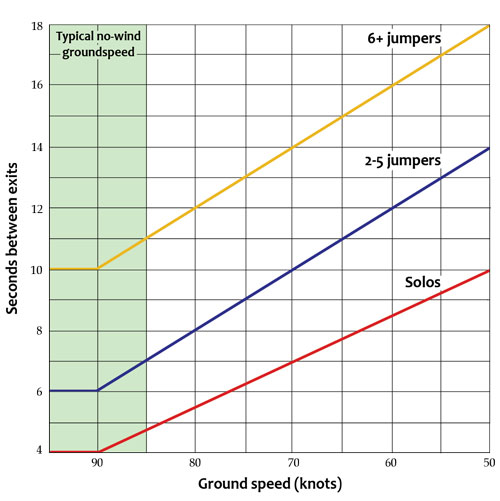