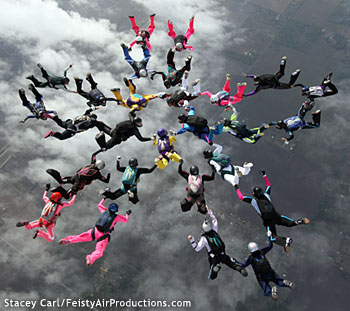 Two women’s state skydiving records (2010 and 2011) and nearly $25,000 raised for The Rose isn’t a bad performance record for an organization that’s barely a year old. Jump for the Rose is a nonprofit organization that was established to combine skydiving and fundraising for breast cancer by skydiver Marian Sparks, a breast cancer survivor and former patient of The Rose.

“Besides being a fabulous fundraiser, this support means an awful lot of mammograms for an awful lot of women,” said Dorothy Gibbons, CEO and co-founder of The Rose. The organization is dedicated to providing screening, diagnostics, treatment, and support to all women regardless of their ability to pay for services. For example, women with health insurance who undergo mammograms at The Rose enable doctors to provide the same service for another woman who cannot pay. Since early diagnosis and treatment are key to treatment success, insured women who are screened and treated at The Rose are literal lifesavers.

“After The Rose took care of me with no insurance,” said Sparks, “I told the doctor (Dixie Mellilo, co-founder of The Rose) I was going to pay her back by raising money for her. That’s what this is all about. These girls that jump with me are just so grateful and delighted to help.” “Marian was in a really bad place, affected by breast cancer with no insurance, so she was one of our sponsored women,” recalled Gibbons. “Her generosity and willingness to give back to an organization that helped her at a bad time so someone else could be helped in the future represents what our community is all about. These are tough economic times for a lot of people, but there is so much paying it forward in this community, it’s so awesome! We are so appreciative of her for raising this money and setting that example. She exemplifies where any of us could be and what any of us could do with that gift of generosity and caring.”

The new state record skydive consisted of 27 women performing three separate, intricate formations in a single skydive. The previous record set at last year’s Jump for the Rose event consisted of two formations, called points, flown by 38 women. The new record skydive flown on Sunday, Oct. 9, was dedicated to Karl Edmunds, who died from breast cancer just one week before the record was set.

“We wanted to dedicate this jump to him because people tend to think of Jump for the Rose as a women’s event, but this cancer can get men too,” said Kara Latimer, owner of Rio Vista construction and secretary/treasurer of Jump for the Rose. “What better way to memorialize lives lost to breast cancer than to have this awesome living tribute?” Many men supported the event as well by buying event merchandise, purchasing raffle tickets for items donated by local businesses, flying in their own challenging skydives, and making donations.

All Jump for the Rose events provide a supportive learning environment for the women involved in the jumps, featuring experienced female skydivers with several thousand skydives coaching and mentoring newer skydivers with as few as 208 jumps. This approach built the team that set a new state record even with limited skydives due to the much-needed rain that rolled across the drop zone. “I was amazed at the number of survivors in this group,” said Gibbons, who is hoping to make her first skydive this weekend. “This disease knows no boundaries of age, race, or economic factors. It’s a disease (primarily) of women and all women have to work together to enjoy the long lives that are possible when the disease is caught early.”

Breast Cancer Facts (from the National Cancer Institute and PubMed) 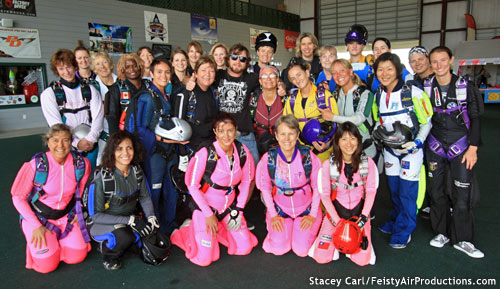