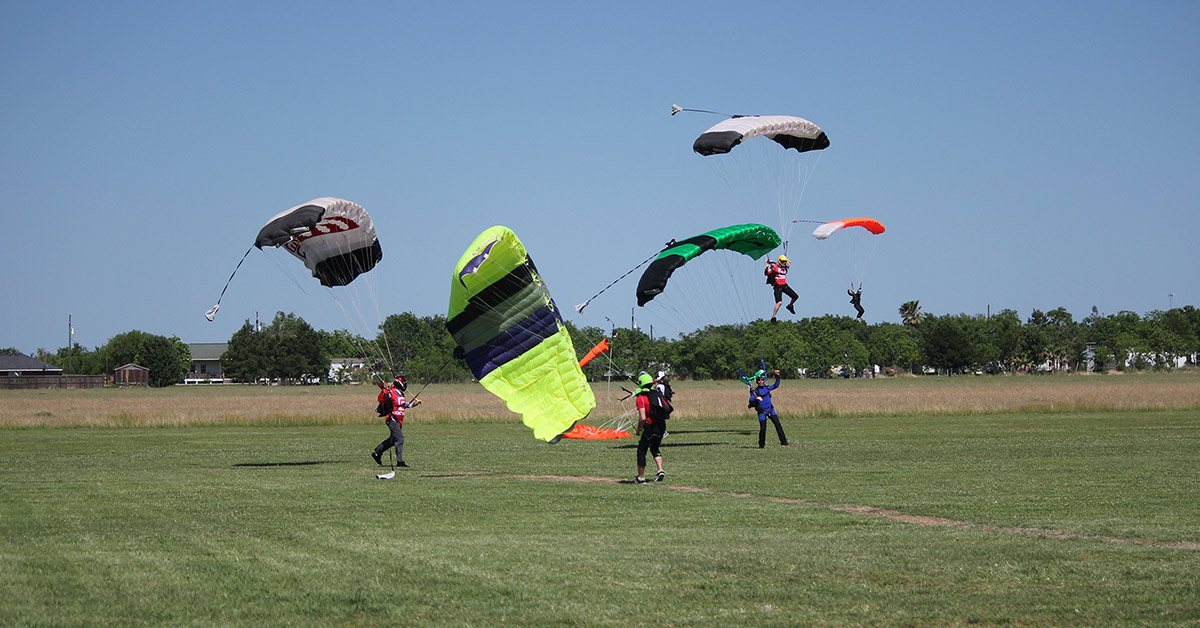 We all know that Skydive Spaceland is a world-class dropzone with excellent facilities and aircraft. What you may not know is that when we opened our doors in early 2000, Spaceland was conducting about 5000 skydives per year. Now, 15 years later, our air traffic has increased by about 20 times; we’re up to around 100,000 skydives per year. With this increase, the risk of a canopy collision during flight, landing, and post-landing has also increased quite a bit.

A good analogy is that when we opened our doors, we were the size of a small airport. We have now grown into a major international airport in terms of air (aircraft and canopy) traffic volume. We simply have to evolve our air traffic practices along with our business volume to ensure the ongoing safety and care of our sport skydivers, customers and staff.

It is an acknowledged fact that canopy flight (collisions) and landing incidents have become leading causes of skydiving fatalities worldwide. To combat this trend, Spaceland has made changes to our original landing area and airspace management to increase safety for skydivers, customers, and staff. Also, it is part of our pledge as a USPA Group Member to separate high-performance traffic from conventional pattern traffic.

What is the issue with the way things are, you may ask?

Higher volume–Primarily, our original airspace and landing plans have become outdated with the increase in volume.

Increased traffic complexity–There has also been a major increase in the complexity of this more crowded traffic. Not so long ago, a 180° hook turn to land was considered radical. These days, a 720° landing turn or more starting at 1000+ feet above the ground is hardly unusual among the swoop crowd flying the fastest canopies. These canopies can be traveling well over 50 miles per hour after such turns, taking up a good deal of real estate both vertically and horizontally. Put this type of traffic in the same area as lightly loaded canopies doing standard 90° turns and flying at 20-25 mph, and you have a lot of potential for canopy collisions both from the very different ways these two types of traffic use the airspace and from the wide variance in approach speeds. By exercising strong awareness and defensive flight (and no small amount of luck), we have managed to avoid serious collisions for the most part, but luck and skill won’t save us from inherently high-risk situations forever. It’s only a matter of time, and the only way to reduce the risk of traffic complexity is by separating different types of traffic, regardless of the license the skydivers in question hold.

Increased encroachments by canopies flying over the runways and taxiways when landing, leading to more potential for conflict between aircraft and skydivers. (Guess who wins that one? Nobody.)

Increased risk of collisions between two skydivers once one is on the ground (getting “taken out” in the landing area) due to limited space and heavy traffic.

Increased risk of collisions with obstacles such as the wind indicators (yep, the arrow and the windsock have both been hit) due to limited space and heavy traffic.

Increased risk of challenging canopy traffic situations, the pressure of which can result in poor reactive canopy handling and thereby landings on the taxiways, runways, or crossing the safety lines (beer line). We shouldn’t need all of our skills and luck to keep us safe during normal operations.

To ensure that we provide the safest and most enjoyable experience for you, and as part of Spaceland’s ongoing quality assurance, we redefined the existing landing areas and procedures a few years ago for your safety and enjoyment. Know that these are not off-the-cuff changes, but the result of months of discussion among Spaceland’s staff and many experienced jumpers to come up with a plan that suits our safety needs of reducing traffic complexity in any given area, while still providing areas for you to land straight in or spiral and swoop, whatever your pleasure. 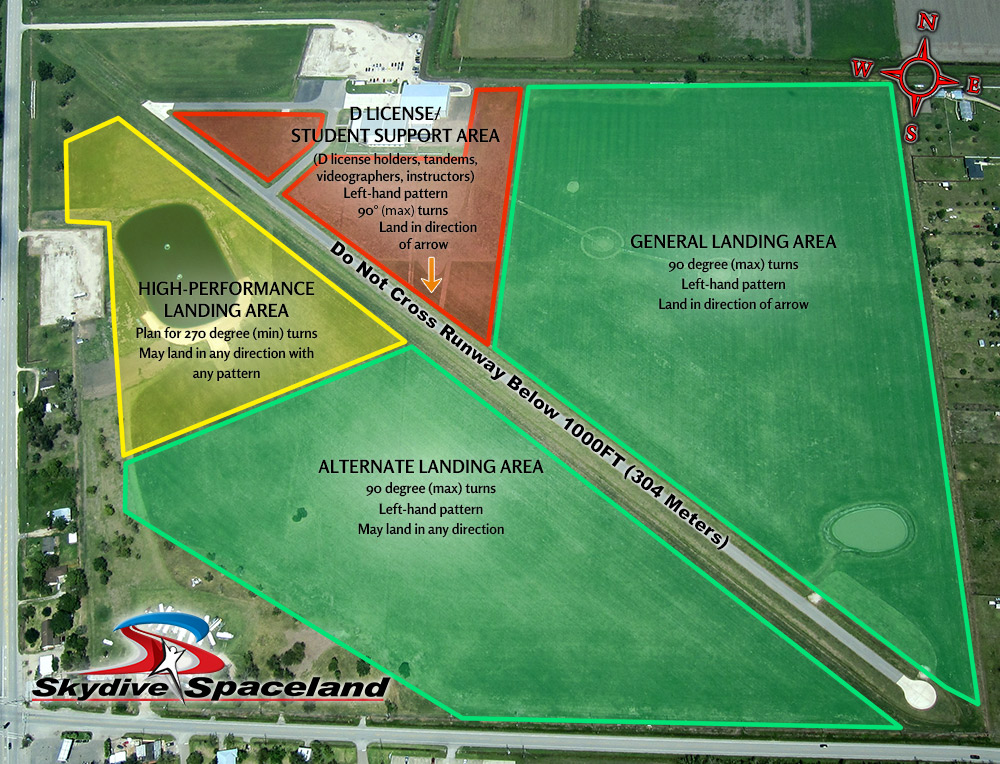 The general landing area is for everyone–all license holders (A-D) and Skydiver Training Program Students. You must land in the direction of the landing direction arrow, and fly a left-hand pattern turning no more than 90° under 1,000 feet. Fly and land within this landing area under 1,000 feet to avoid conflict with jumpers landing in other landing areas. We have also mowed  additional acres of short grass on the northwest corner of this area.

The alternate landing area is for use by all (A-D) license holders and students as needed. You may land facing any direction regardless of the landing arrow direction. Fly a left-hand pattern turning no more than 90° under 1,000 feet. Fly and land within this landing area under 1,000 feet to avoid conflict with jumpers landing in other landing areas. When landing here, please also be aware that our aircraft will often land on the grass runway next to and just south of the paved runway (it’s easier on the tires), so it’s best to land at least 20 yards (ish) south of the pavement or to kneel down at least that distance away from the pavement if an aircraft is approaching.

The high-performance landing area has roughly 5 acres of mowed, maintained short grass area for use by authorized skydivers only. You may land facing any direction and fly either left- or right-hand patterns (left-hand preferred) as long as your planned turn is no less than 270° (unless participating in an organized canopy course, organized individual coaching, or competition event). Requiring planned turns of no less than 270° is intended to ensure that there is no conflict between vertical and lateral approaches to the swoop pond or surrounding areas. Turning less than 270° is permissible (and encouraged) if conditions are not safe for that turn amount at the time of landing.

To stop airspace conflict and congestion in this area, any skydiver wishing to use this area must:

Any skydiver identified as having an unsafe landing technique may have their high-performance landing area privileges revoked.

The D license and student support landing area is for use by D license holders, Skydiver Training Program instructors, tandem instructors, and videographers directly supporting tandem and STP skydives. Land here via left-hand pattern in the direction of the arrow, turning no more than 90° in the landing pattern. Never overtake tandem canopies closely in this area! (Or anywhere else.)

Any jumper landing here who exhibits unsafe landing technique will have their privilege to land in this area revoked.

We understand there will be times where individuals or groups may need to land in an area that is not in accordance with the new procedures. We request that you speak with our Dropzone Manager in advance, and on a case-by-case basis, we will work with you to meet your requirements within our safety framework.

We understand that many of you have been coming to Spaceland for a long time, we trust that you understand that the changes to the landing areas have been made in the interests of safety and improving the way in which we enjoy our sport. This system provides everyone, whether an experienced sport jumper, beginner, tandem customer, or customer support jumper, a safe and practical airspace to operate in. We thank you for your ongoing support and look forward to working with you all to make our sport and dropzone even more amazing than it already is.

6 Replies to “Spaceland Landing Area Policies: A Time and Place for Everything”